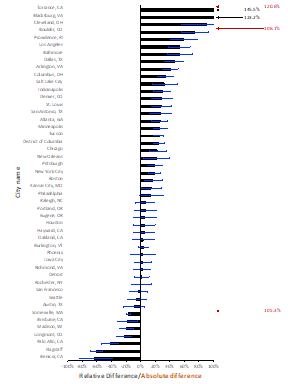 Cities dominate greenhouse gas emissions. Many have generated self-reported emission inventories, but their value to emissions mitigation depends on their accuracy, which remains untested. Here, we compare self-reported inventories from 48 US cities to independent estimates from the Vulcan carbon dioxide emissions data product, which is consistent with atmospheric measurements. Dr. Kevin Gurney and his team found that cities under-report their own greenhouse gas emissions, on average, by 18.3% (range: -145.5% to +63.5%) – a difference which if extrapolated to all U.S. cities, exceeds California’s total emissions by 23.5%. Differences arise because city inventories omit particular fuels and source types and estimate transportation emissions differently. These results raise concerns about self-reported inventories in planning or assessing emissions, and warrant consideration of the new urban greenhouse gas information system recently developed by the scientific community.  You can find the article here. Or read about it in the New York Times, Bloomberg News, The Hill, US News & World Report, The Independent, or New Scientist.